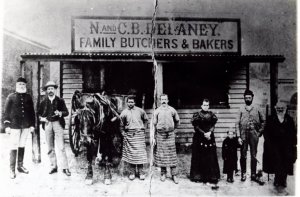 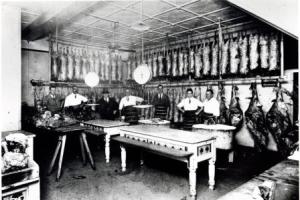 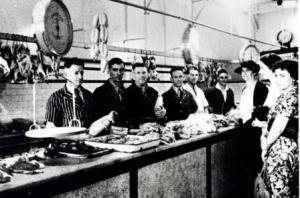 Everyone Ate Meat – The Butcher’s Shop

Butcher’s shops in the Blue Mountains in the early 1900s were an important and vital part of the community. These were places where the sight and smell of raw meat was pervasive, quite different from the packaged meat at the supermarket counters of today. Butchers were men of influence and closely associated with the life of the local community. At the funeral of the Blackheath butcher Nick Delaney in 1928 it was said “It would be difficult in the future to know or appreciate Blackheath without his kindly face and fine figure. He never tired of doing good deeds, and extending a helping hand to people in trouble, without thought of reward.”

These were times when most Australian families ate meat at every meal, in the 1890s per capita meat consumption was 2.6 kg per week compared with 1 kg in Britain. Meat was widely available, fresh and local, because unlike most other shopkeepers of the time, many butchers retained control of the whole supply process. From selection and purchase of livestock from local farmers, some even ran their own sheep and cattle, to slaughtering in or near their shop; butchering of the carcass and preparation of sausages and corned meats, to personal service and home delivery.

William Rayner, Springwood’s first butcher, opened his combined butcher shop, general store and bakery in Macquarie road in 1877, now the Old Bakery Arcade. Rayner had slaughter yards at Yellow Rock and prepared tallow for sale from trimmings and poor quality carcasses In December 1892 Rayner bought up a shipment of cattle that had been killed and maimed in a goods train derailment just west of Springwood station and proceeded to boil them down at his shop. The weather was hot and the stench pervasive, eau de cologne was said to be at a premium, and after two court sessions Rayner was forced to move his operations to Cable’s Spring near St Columba’s, a sparsely settled neighbourhood at that time.

Katoomba’s early butchers included George Davies who advertised his state of the art refrigeration in 1912, George Shaw and Sons and ‘Honest’ George James, who opened his first shop in Main Street in the 1890s and had shops in Katoomba Street 1913, Leura Mall 1905, and Wentworth Falls.

George James was not only a butcher but a prominent citizen, businessman, man of property, alderman and twice mayor of Katoomba Council – in 1909 and 1914. As a member of the Council Parks and Reserves Committee he was also active in establishing many of the lookouts and walking tracks we enjoy today. Among the many buildings he owned and erected in Katoomba, he considered James’ Building 1925, still standing opposite Katoomba Station, his proudest achievement for the town. His home, ‘McClintock’ in Abbotsford Rd, is now a B&B. Four of his five sons also became butchers and operated James Bros Quality Butchers at Circular Quay in the 1920s.

Transformed during the 20th century by refrigeration and electric cutters, mincers and saws; the traditional butcher’s offerings have diversified to include chicken and game, which was once rarely sold by the butcher, along with fancy sausages, marinades and seasonings. Although we now eat less meat, the greatest threat to the traditional butcher is the supermarket, which now accounts for over 70% of meat sales. Yet butchers do survive and continue to offer quality and service to their customers, many of whom they still know personally, something few supermarkets could claim.

The Earliest Butchers
In fact when you think about it, butchery is one of the oldest human skills and may even predate hunting by our human ancestors. Archaeological evidence suggests they may have scavenged kills from other more powerful carnivores such as lions and leopards. When we consider the massive bone smashing hammer stones and cleavers from Bed II at Olduvai Gorge made by Homo ergaster, this layer dates to around 1.5 million years ago, we can see the importance of bone marrow, and later meat, in the diet. There could well have been specialists, with advanced skills in dismembering carcasses for ease of transport back to base camp – how’s that for a line of descent to modern butchers.

A Note on Rech-tub Kla-tay the Secret language of Butchers
Butchers’ back slang originated in Smithfield Market in around 1850 and was used by the meat traders to insult each other without offending members of the public and to speak about the prices, age or quality of the meat without letting on to customers that they might be buying something sub-par. It was also used to make comments about customers, be they old men or young women, and in this way it is similar to Cockney rhyming slang as a thieves dialect; they wanted to keep their conversations private but still be able to shout to each other in public.