In its early years Katoomba laid no claim to the status it later achieved among the Mountain towns. While there had been an inn and stock resting place at Pulpit Hill from the 1830s, the town’s real beginnings were with the railway. Towards the end of the 1870s, this lonely mountain outpost began to change dramatically. The official name change to Katoomba occurred in 1878, the same year that businessman John Britty North registered his coal mine at the base of the cliffs near the Orphan Rock. Within a year the high quality of his coal was winning prizes at the Sydney International Exhibition and the small settlement of Katoomba gained a reputation as an important mining centre.
While North was developing his mining enterprise, the leaders of Sydney society also began casting their eyes in the direction of Katoomba. The 1870s had seen the growing popularity of the areas of Springwood  and Mt Wilson as locations for country retreats. The 1880s-90s saw the beginnings of an era of hotels and guest houses in Katoomba and the upper mountains. Shops, schools and a local newspaper appeared and in 1889 the town was gazetted as a municipality. Its first Council was elected in January 1890; it governed a socially divided community – at one extreme a roaring mining camp with slab and weatherboard cottages and hotels, cable ways and horse drawn tramways stretching out into the Megalong and Jamison valleys and at the other a fashionable and wealthy resort high on the hill of Katoomba Street, together they comprised about 100 buildings.
The early visitors who arrived during the 1880s and 1890s were primarily from the privileged classes. They stayed in gracious comfort at stylish establishments like The Carrington, The Leura Coffee Palace (later The Ritz) or The Balmoral and sought the mysteries of nature among the cool fern walks and glens. They had money and leisure and the Blue Mountains offered a hill station retreat from the summer heat and dirt of the city, and the pressures of the political and business world of Sydney.

By the turn of the century economic and social changes were occurring in the wider Australian community which began to produce a more affluent and mobile middle class. Visitors whose preference was for cheaper less palatial accommodation arrived and the patronage of the rich moved elsewhere. As the war clouds began to gather in Europe Katoomba was entering its boom period and in the post war optimism of the 1920s there were over sixty guesthouse operating in the town.

The motor car also revolutionised tourist activity and tourist coach firms flourished in many of the upper mountain towns, some guest houses even kept their own fleet. To the holiday makers and honeymooners who flocked to the guest house during the twenties and thirties, Katoomba was the holiday capital of NSW. They spent the days touring the sights in their charabancs and putting roses in their cheeks in the bracing mountain air; and in the evenings danced, roller-skated and attended the latest moving pictures.
Following the Second World War the Mountains became increasingly suburbanised with cheap land and long travelling hours for commuters; local tourism declined as the coast gained in popularity and cheap overseas travel become possible. The old hotels and guest houses gradually lost patronage and many fell into disrepair, some were demolished, some were converted to nursing homes hostels and a few remain.
By the 1960s and 1970s day trippers arriving by car or bus replaced the long stay tourists and the supermarkets forced many of the old style shop keepers out of business, to be replaced by coffee shops, galleries and souvenir shops.  Yet despite the changes, the economic and other benefits of preserving the extensive original building fabric of Katoomba have finally been acknowledged and much of the old Katoomba Street remains as do some of its stories.

Katoomba Street was named before 1882 and is now the main street of the township. The earliest business centre however developed on Main Street, originally the Bathurst Road, in the area of The Balmoral and later The Burlington. This development included the top of Park Street where the Town Hall and Council Chamber were situated, then gradually spread to the intersection at the top of Katoomba Street as the railway station became a centre of activity; then around the corner and down the hill to Waratah Street. A number of building inventories and heritage surveys have been carried out in recent years and these together with early photographs, surviving building plans and rate records, form the basis of this presentation. New information however will continue to be discovered as research continues.

Following the completion of the railway line to Mt Victoria in May 1868, the area was known as The Crushers, the name of the quarry established to supply the railway with track ballast. Trains from the West also found The Crushers a convenient place to adjust their loads before the steep descent to Penrith. The present station building replaced an earlier timber platform and station building erected in 1881. Until motor cars become affordable in the post war period and the highway improved, most people arrived at Katoomba by train and were conveyed to guest houses by local cabbies, the most famous being the local poet, songster, raconteur and favoured driver of royalty and the aristocracy, Harry Peckman.

Peckman was born in Kurrajong in 1846, and in the 1880s, with his older brother John, started a hire service of wagonettes with a fleet of 30 horses. In 1884 he rescued a tourist, a Captain Black, who had become lost in the wilderness at Echo Point for over a day thinking Katoomba was below him and trying to find a way down; he had written a last message to his family when the Peckmans found him. Harry also did the surveying for the Federal Pass walking track in 1900. In 1868 at the age of 21 he was engaged to drive the Duke of Edinburgh’s royal party to view the Wentworth Falls waterfall, thus began a long association with many heads of state, parliamentarians and international visitors, including the Governor General, Lord Carrington, Sir Frederick Darley, Chief Justice of NSW and owner of Lilianfels. The brothers established a daily coach service to Jenolan Caves in 1889 and in 1892 he married Emily Sarah McAveny from the Megalong Valley, he was 46, she just 15. A few years earlier Emily’s grandmother, had murdered her grandfather with an axe while he was drunk, because of his ‘cool treatment’ of her. Her death sentence was commuted to life and she died 10 years later in Darlinghurst goal. By 1905 the Peckman’s fortunes were in decline and Harry spent his final years as a cabbie on the rank until he was granted a government pension at the age of 83, five years before his death. Peckman’s Road was named after him around 1900.

In the 1870s, while on a picnic with Harry Peckman, Neale took a local Kanimbla Aboriginal woman, known as Black Bet or Princess Betsy, to Katoomba Falls and asked her what the place was called, her answer being ‘Katoom-bah’, translated then as ‘place of falling water’. However recent research has shown that this also refers to an edible fern root that was a staple Aboriginal food collected from the Megalong and Jamieson valleys. Neale died in 1890 in Wentworth Falls and was given a large Methodist funeral.

In 1883 Froma was bought by Michael Metcalf (1813-1890), a merchant, customs agent and prominent Sydney Anglican, who lived there with his family until 1911. By 1914 old Froma had gone, replaced by a new kindergarten school of six rooms, close behind the new post office, which had recently been erected in rapidly developing Katoomba Street.

From the mid 1920s these premises housed Pepperday’s Mercery Store and Helen Hunter’s Ladies Hairdressing salon and gift store. Woolworths Food Market opened here in 1958, see opening day below. The façade underwent later modification and during the 1990s was occupied by Crazy Prices, Go-Lo, and more recently a computer shop.

Opened 23 June 1939 as a purpose designed retail outlet for the Woolworths chain. Prior to this in the 1930s the site was the premises of S Kensell Grocers and the Civic Fruit Vegetable and Confectionery Shop. It is significant as one of the few remaining examples of a chain of purpose-designed stores from the period. During the 1990s was occupied by Crazy Prices and more recently an office supplies store.
An unimproved property was purchased by the Bank of NSW in November 1938 and premises were erected in 1956-7. One of a number of purpose designed bank buildings of the Post War era in Katoomba Street which provide a positive and monumental element within the streetscape. Later is was the State Bank and more recently Mr. Pickwick’s Bookshop.
Goyder Bros. were a prominent Katoomba family with interests in real estate, auctions, tours and holiday cottages. Tozzi’s building was altered in 1939 by the then owner Mr. Simos, local architect H L Blackwood.
Alterations to an early building carried out in 1940 for Mr. Simos, design by local architect H L Blackwood, shopfront is post war, with cement rendered façade, and metal frame windows from 1940 modification. Katoomba Record shop in 1980s, recently a rug shop.
Two storeys with exuberant parapet detailing, cement moldings and green ceramic tiles in the pedimented sections; the fine lead light shop fronts date from the 1920s.

In the mid 1930s T J Andrews occupied 108-110 and the first Soper Bros. replaced a ladies hairdresser in 112-114 before Soper Chambers was built next door in the late 1930s. Now it is Higgins & Higgins Solicitors and RSPCA Op Shop. 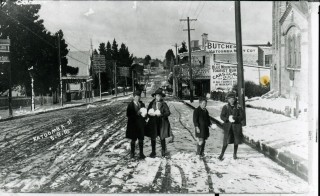 In the second half of the 1930s the building was occupied by W Smith bootmaker now Peter Sudich Art Supplies & Framing (155) and Johnson & Sharp bakers (153), The Buttery.

In the winter of 1908 Harry Phillips, an unemployed printing machinist, suffering from work injuries to both hands which cost him his job, arrived in Katoomba to recuperate. After three weeks camping out with his wife Isobel and their only child Isobel, the landscape had made such an impression that he decided to settle in the area permanently and established a small confectionery and photographic business at 159 Katoomba Street and by 1912 had moved to 179 Katoomba Street. As business expanded he combined his talent for photography with his skill as a printer, producing the Blue Mountains view books for which he has become best known.

Harry Phillips brought a passionate intensity to the presentation and promotion of the Mountains that had never been seen before and would go to any length for a picture often waiting hours for the right conditions. His books were sent to the trenches on the Great War and his photos hung in Parliament House. A sober and religiously minded man of slight, wiry figure and always formally attired, his friends would joke when there was mist about, that, ‘Harry’s happy’.  Harry and Isobel were both born in Ballarat into families of 11 children. Note classically derived details of later Interwar first floor addition: panels, plaques, Greek Key band. Gemglow Jewelers (157), Serene’s Café (159), Elephant Bean Café.

All images from the Blue Mountains Local Studies collection at Springwood Library.